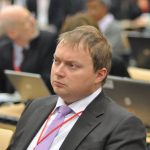 Remco van Mook has recently resigned as director of interconnection at Equinix, where he looked after the company’s global interconnection strategy as well as the company’s Internet Exchanges. As part of that position, he got involved with all sides of the company – from datacenter engineering and network architecture to marketing and corporate development.

He was CTO of NDIX, responsible for architecture and technical strategy, from 2000 until 2009. NDIX was the first Internet Exchange spanning across an international border, with the intention to promote regional development. NDIX has evolved into an exchange platform connecting a diverse range of companies across a multitude of cities in the Netherlands and the states of Nordrhein/Westfalen and Niedersachsen in Germany.

Previously an active contributor to EURO-IX, he involves himself mostly with network design challenges, the European datacenter market and regulatory affairs. He is co-author of a few RFCs, including RFC 5452, to upgrade the security of current DNS (non-DNSSEC) implementations against Kaminsky-style attacks and the widely used RFC 2322.

He is a regular speaker at conferences and RIPE meetings and advisor to various government organisations on Internet-related affairs. He also currently serves as the co-chair of the Connect Working Group within the RIPE community and is a member of the RIPE NCC Executive Board.

When Remco is not sitting on a plane, attending conferences or taking over the world, he lives near Deventer, the Netherlands with his wife and two daughters.