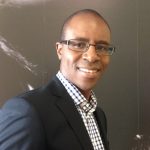 Mathew Chigwende is the Head of Data Network at Liquid Telecom. He has over 15 years experience in Telecoms.

He started as a graduate Engineer at TelOne in Zimbabwe and in 2002 joined Econet as Technical and Support Manager for its Ecoweb Brand – responsible for building the network into one of the biggest ISPs in Zimbabwe. In 2006, Mathew moved to UK and joined BT as a Project Engineer working on MPLS and Financial Extranet projects.

Mathew was educated at University of Zimbabwe where he obtained a BSc in Engineering and later an MBA. He holds a number of Cisco professional certifications.

Mathew is married and lives with his wife and three children in Kent, UK.

He is a member of AfPIF Program Committee.