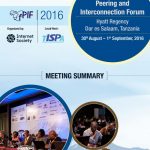 The 7th annual Africa Peering and Interconnection Forum (AfPIF) came to a close, with participants committing to continue collaborating and pushing to increase content and interconnectivity within Africa.

This year’s event theme was “Back to Basics”, which reflected over the fact that thus far there has been significant progress in the Peering and Interconnection ecosystem. However, some areas have lagged behind like policy, content development, terrestrial infrastructure pricing, which are all important in advancing interconnection to the next level. In going back to basics, the participants took a deep dive into the topics and issues to unearth the underlying challenges, barriers, opportunities and strengths. The goal was to unpack the underlying issues and seek solutions that will move peering to the next stage where the 80/20 local/international content by 2020 will be a reality.

These are some of the salient issues that were discussed at AfPIF 2016:

1. Content generation and hosting remains a challenge – for the continent to reach its goal of 80% content exchanged locally, new strategies need to be put in place. A new report by the Internet Society showed that local languages were key to Internet development and continued use by the local community. Further, monetization and development of proper business models were identified as challenges to financing of content business.

2. Bilateral meetings – in the last seven years, technology experts, businesses and government representatives have come to AfPIF and discussed ways to improve connectivity. Some countries have received Google Global Cache and Akamai Cache just by coming to AfPIF and having a meeting and a handshake. This year, more networks were in attendance with over 35 peering personals including Netflix’s presentation on partnering with more networks in the region.

3. Measurement and statistics – availability of statistics has been a challenge but the continued roll out of RIPE-NCC Atlas Probes and the measurement labs is helping the continent gather useful data. The Route Collectors and data analyzers show that the region is making progress.

4. The business of IXPs – one of the common themes when discussing IXP operations has related to the question whether IXPs should operate as non-profit, for profit or on voluntary basis. The discussions were robust and the bottom line was that every IXP should choose its model depending on the market and community needs.

5. Bringing the world to Africa and taking Africa to the world – one of the panel discussions was on continued investment in infrastructure, and why it is important; to cater for growing markets, offer competition and continue driving down connectivity costs, which in turn would lead to more people coming online.

The Daily Summaries contain a highlight of what was discussed every day.

28.6% Internet penetration rate in Africa160 Gbps Total internet capacity in Africa
8% Increase in intra-Africa connectivity from 3% in 2012 to 11% in 2016 according to Telegeography

We call this Peering Coordinators Day.

In line with AfPIF’s  theme of “Back to Basics”, presentations dealt with background information, statistics, innovation, and developing ways to reach customers, peering tutorials and measurements.

Telegeography presented on international bandwidth pricing trends, which showed that bandwidth costs have continued to fall in Sub-Saharan Africa, given the extensive investment in ICT infrastructure.

Research by Telegeography showed that intra-Africa connectivity has increased to 11% this year, compared to 3% in 2012. City to city routes originates from hubs in South Africa, Morocco and Egypt to the rest of Africa. While the cost of bandwidth has fallen, the cost of international transit has also fallen to below $10,000 per STM1 to London.

Teraco, one of the largest carrier-neutral data centers gave a regional overview. Africa has 28.6% Internet penetration with a total capacity of 160Gbps, and South Africa accounts for 90Gbps. There are 34 IXPs in 26 African countries; the oldest is JINX, set up in 1996 and the newest is Gabon IX, set up this year.  Port fees can vary depending on the IXP.

During the session on disruptive technologies, Netflix shared its interest to bring content to over 190 countries. Currently, Netflix delivers series and movie content to 81.5 million members with users logging a billion hours on its servers every month.

How Netflix Does It

To deliver content faster, Netflix peers at IXPs with ISPs and other private peers by placing its servers on the network if it detects high usage on the network. Netflix replenishes content during off-peak hours, meaning the networks do not slow down. Currently, only South Africa has Netflix servers in the continent and the company has highlighted that it wants to add more cities to its POPs.

The peering tutorial is a session where people get the latest on  regional resources and how to use them.  AFRINIC shared information on the current uptake of IPv6 and IPv4 exhaustion, and the strategies taken to encourage uptake of IPv6 resources.

Although AFRINIC still has IPv4 addresses, uptake of IPv6 has grown, and with continued training, the registry expects the number of networks taking up and announcing IPv6 to grow.

One of the biggest challenges faced in Africa ICT scene is the lack of updated statistics, but the tech community has put in place various tools to collect and share data.

Africa route collectors’ data analyzer is a tool to support peering growth in the region. While it’s still under development, it aims to be an open source web platform with data collection system and will  give stats on IXPs at national and regional level.  Its aim is to analyze the network (ASNs, IPv4 and IPv6 addresses) visible at an IXP.

KENET shared its work with the Measurement Lab. The Lab allows end users and networks to track  the quality of broadband and helps  researchers and others work together. It finds performance problems, gathers data on network neutrality, identifies traffic shaping, and performs basic speed tests.

The last presentation was a proposal for the establishment of Africa Internet Measurement Observatory. This will allow people to log and input data, perform analysis and interact with other users. The community will run it and will share data and other expertise between Africa’s tech communities.

In her opening remarks, Eng. Dr. Maria L. Sasabo highlighted the significant strides that Tanzania had made in ensuring infrastructure development and facilitating the private sector’s ability to compete on the global stage for investments.

The government has put in place the Universal Service Fund that pushes for establishment of infrastructure in economically unattractive areas, allowing operators to connect and serve more people. Currently, 79% of the population is covered through voice and 17 million people have access to the Internet.

The keynote speech was based on a research on promoting content in Africa. The research, commissioned by the Internet Society, found that local languages were key to development and increase of local content and hosting in a country. Studies in Asia found that the increased use of local languages online had led to increased content, accessed locally.

Monetization of the content is important to the ecosystem, though it remains a challenge for many websites in languages other than English, French, Spanish and Portuguese. Even with the app stores, payment of local language content remains a challenge, which makes crowd funding and seed funding hard; people cannot invest without a proper business model.

The last panel of the day was on policy and regulation, where government and private sector participants sat together and discussed ways to conquer cross border connectivity. Participants agreed that major strides had been made, especially in Eastern and Southern Africa, with regional bodies exploring ways to work together more. The legal framework for data protection and privacy was cited as one of the major stumbling blocks to global cloud providers entering the African market.

Day three at AfPIF usually discusses business issues; how to develop business models for the IXP, infrastructure or content business.

While the region has $3 billion of cable investments, the new cables are targeting unconnected countries, offering diversity, increasing competition to further drop the cost of connectivity, and providing services to new players in the market, who may not be connected with the existing infrastructure.

It is the day that those with experience in running businesses share with others and explore ways to improve or engage the partners in areas where it might be needed.

When it comes to expanding networks, the move now is to “bring the world to Africa and take Africa to the world”. A panel discussion explored various strategies put in place to guarantee increased investments within and outside Africa.

London, Amsterdam, Marseille and Fujairah were identified as the main peering points for African networks seeking global transit. However, Portugal and Madrid are said to be coming up fast, for providers along the West Africa coast.

There are more fiber optic cables coming up; Liquid Sea and Angola Cables are the current confirmed ones. The Angola Cables submarine cable will connect with Brazil and the US coastal city of Miami, delivering 40Tbps of capacity in 2018. Angola Cables is also connecting West Africa to Portugal.

While the region has $3 billion of cable investments, the new cables are targeting unconnected countries, offering diversity, increasing competition to further drop the cost of connectivity, and providing services to new players in the market, who may not be connected with the existing infrastructure.

The decision whether to operate as for-profit, non-profit or offer free services is left to the operators but discussions made it clear that IXPs grow because of people’s relations and not because of any particular business model.

Should an IXP operate as a business or not?

One of the questions asked during the IXP business models was whether an IXP should operate as a business or on voluntary basis for the benefit of the community. It was argued that many players in the community had donated equipment and volunteered to help set up IXPs in various parts of the continent.

The decision whether to operate as for-profit, non-profit or offer free services is left to the operators but discussions made it clear that IXPs grow because of people’s relations and not because of any particular business model.

Over the past seven years, AfPIF has enjoyed support from the community and sponsors; both local and international. This year there were 298 participants, compared to 232 last year, women participants rose to 39compared to 28 last year; Senegal still holds the record with 50 female participants. In the live stream, 839unique views were recorded from 28 different countries. There were 23 sponsors compared to 18 last year.